Book Club: Fascinate: Your 7 Triggers to Persuasion and Captivation

Oh, boy... it's been awhile. We were traveling the past two weekends (to Notre Dame for my sister's graduation and Houston for another sister's engagement party), so the weeks have been flying. I squeezed a bunch of stuff -- work, life, friends, etc. -- into the days between trips, and now all of a sudden, tomorrow is June 1. How does that happen?

Last week, we met at I.'s new house for book club. I. served up an absolute feast of appetizers and all the fixings for stir-fry, plus fruit and macarons for dessert. (I managed to keep myself to one macaron since my glucose screening was the next morning... which, by the way, wasn't nearly as bad as all the horror stories you hear. The drink tasted like flat Sprite, I was fine with the multiple blood draws despite being needle-phobic, and I didn't feel sick. A McDonald's egg McMuffin and a long afternoon nap helped with the "recovery.")

During dinner, we chatted about Room -- quite the page-turner! The story is told from a five-year-old's perspective, which influences the language and makes the narrator a bit unreliable (in a good way). We often wondered what the adults in the story were thinking and feeling, a kind of fill-in-the-blanks technique that got us invested in the story. Though parts of the plot seemed far-fetched or questionable, we admired how the author portrayed the idea of a kidnapped-girl-turned-mother-in-captivity in a different way.

Next month, we're going in a different direction with a non-fiction read called Fascinate: Your 7 Triggers to Persuasion and Captivation by Sally Hogshead. I've heard a lot about this book among small business owners and entrepreneurs. I wasn't sure the other ladies would be interested, but when I filled them in on the premise, they suggested adding the book as our next pick.

I read a majority of it on our flights to and from Houston... so I'm eager to see what everyone thinks, especially since there's plenty to think about from a non-marketing angle. And I took the test to discover what my personal fascination triggers are (very cool!). It will be really interesting to hear what the other girls' triggers are too. 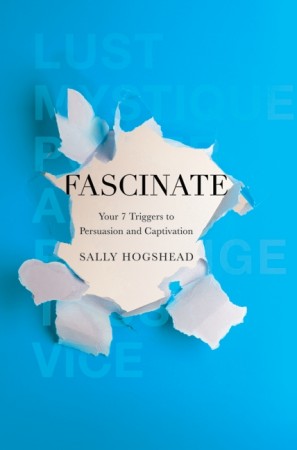 Book Description (from the back cover):
What triggers fascination, and how do companies, people, and ideas put those triggers to use?

Why are you captivated by some people but not by others? Why do you recall some brands yet forget the rest? In a distracted, overcrowded world, how do certain leaders, friends, and family members convince you to change your behavior? Fascination: the most powerful way to influence decision making. It's more persuasive than marketing, advertising, or any other form of communication. And it all starts with seven universal triggers: lust, mystique, alarm, prestige, power, vice, and trust.

Fascination plays a role in every type of decision making, from the brands you choose to the songs you remember, from the person you marry to the employees you hire. And by activating the right triggers, you can make anything become fascinating.

To explore and explain fascination's irresistible influence, Sally Hogshead looks beyond marketing, delving into behavioral and social studies, historical precedents, neurobiology and evolutionary anthropology, as well as conducting in-depth interviews and a national study of a thousand consumers, to emerge with deeply rooted patterns for why, and how, we become captivated.

Hogshead reveals why the Salem witch trials began with the same fixations as those in Sex and the City. How Olympic athletes are subject to obsessions similar to those of fetishists. How a 1636 frenzy over Dutch tulip bulbs perfectly mirrors the 2006 real estate bubble. And why a billion-dollar "Just Say No" program actually increased drug use among teens, by activating the same "forbidden fruit" syndrome as a Victoria's Secret catalog.

Whether you realize it or not, you're already using the seven triggers. The question is, are you using the right triggers, in the right way, to get your desired result? This book will show you.