It's a cloudy, rainy day... the kind that makes me want to curl up on the couch with a good read.  For now though, let's chat about book club.

First, a recap of our last meeting... Four of us met at J's place last week to discuss Fifty Shades of Grey.  J. made a spread of veggie pizza, spinach dip, cheese & crackers, and fruit salad.  And of course, we had to indulge in some wine!

For the first time, we had all finished reading the book.  One person was onto the second book, and another was re-reading the series.  We ended up having an engaging discussion with plenty of opinions.  There was lots of talk about how it wasn't well-written or very realistic: repetition of words and phrases, the "inner goddess" and "subconscious" references, how innocent/inexperienced Anastasia was for a 21-year-old, how quickly the relationship moved, etc.

We talked about Anastasia and Christian's relationship (or lack thereof?).  Some felt Anastasia needed to get out of the situation, that she was a young and naive girl caught up in a major crush and some serious infatuation, that Grey was being a bit creepy and stalker-ish, that we weren't sure why he was so into her.  One of us in particular felt that Anastasia was annoying in that she didn't understand that Grey, as a victim of abuse, couldn't automatically and easily give her "more" of an emotional relationship.

Personally, I don't think I'm going to read the second and third books.  It's not even because of the erotic scenes; it's the poor writing and the creepiness factor of their "relationship" (which I hear becomes more of a true relationship in the second and third book).  I've seen enough girls who will do anything for a guy, even if it means going against what they want, need, or value.  Perhaps Anastasia enjoys this type of relationship, but if she keeps wanting more of an emotional connection or isn't comfortable with what Grey demands, it makes me want to scream at her to get out, to see who else and what other kinds of relationships are out there, to discover what she needs and wants.

I also felt like the book could have been condensed, as there was so much of the same thing, over and over again.  Those who had read beyond the first book agreed that the full trilogy could probably be edited down into one book (though that wouldn't be a great option from a profit perspective for the publishers and author... ha!).

We discussed a lot of other details, but I think it's time to move on to our next selection: The Happiness Project by Gretchen Rubin.  If you want to know what it's about, look no further than the full title: The Happiness Project: Or, Why I Spent a Year Trying to Sing in the Morning, Clean My Closets, Fight Right, Read Aristotle, and Generally Have More Fun.

Who isn't looking for the secret to happiness?  Happiness is a highly personal thing, but Gretchen shares her own journey in hopes of helping others find their own sources of happiness. 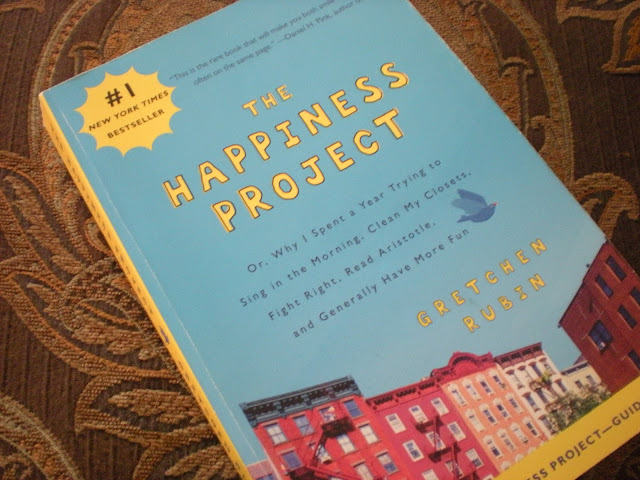 From Publishers Weekly (via Amazon):
Rubin is not an unhappy woman: she has a loving husband, two great kids and a writing career in New York City. Still, she could—and, arguably, should—be happier. Thus, her methodical (and bizarre) happiness project: spend one year achieving careful, measurable goals in different areas of life (marriage, work, parenting, self-fulfillment) and build on them cumulatively, using concrete steps (such as, in January, going to bed earlier, exercising better, getting organized, and "acting more energetic"). By December, she's striving bemusedly to keep increasing happiness in every aspect of her life.

The outcome is good, not perfect (in accordance with one of her "Secrets of Adulthood": "Don't let the perfect be the enemy of the good"), but Rubin's funny, perceptive account is both inspirational and forgiving, and sprinkled with just enough wise tips, concrete advice and timely research (including all those other recent books on happiness) to qualify as self-help. Defying self-help expectations, however, Rubin writes with keen senses of self and narrative, balancing the personal and the universal with a light touch. Rubin's project makes curiously compulsive reading, which is enough to make any reader happy.
Posted by Melissa at 4:20 PM