Our last book club meeting took place at N's apartment. Her boyfriend, M., is a professional chef and treated us to a taco dinner, complete with chicken, shrimp, and all the toppings. And for dessert, we nibbled on Girl Scout cookies (okay, I think I ate about six!). It was a Friday night so we all hung out around the dining room table and caught up for awhile.

As for the book, Little Bee, our group had mixed feelings about it. For some, the story and characters—while powerful and interesting—didn't resonate enough. I thought it was well-written and the format of two narrators supplied multiple perspectives to an unusual storyline. The characters were unique but somewhat unlikeable. Overall, not bad but not one of my favorites.

Next up, we're reading one of the books suggested here on the blog (thanks for the recommendation, Feisty Optimist!): The Plague Tales by Ann Benson. It's a longer one, but with the way our schedules worked out, we have couple extra weeks between meetings this time. 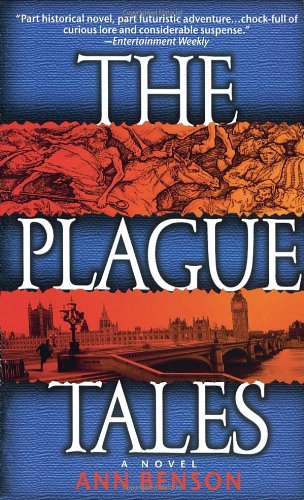 From School Library Journal via Amazon.com:
First time novelist Benson tells a parallel tale of 14th- and 21st-century England, centered on the ever-fascinating Bubonic Plague. Alejandro Canches, a 14th-century Spanish physician, becomes the Papal appointment to the English court of Edward III. He is consigned the task of keeping the court alive during the Plague years beginning in 1348. The descriptions of treatments, daily life, and death during these terrible times are fascinating. Alternating chapters take place in 2005, a few years after the "Outbreak" and the end of antibiotic effectiveness against microbes. This is a world of biocops who shoot to kill if the infected try to escape, where transatlantic travel must be done in sterile gowns and masks, and "body printing" eliminates any semblance of privacy. Physician Janie Crow, in England for mandatory retraining since the drastic drop in population has rendered her surgical skills obsolete, accidentally unleashes the 14th-century plague bacillus on an ill-prepared London. This adventure grabs readers and carries them back and forth in time on the trail of the deadly bacteria. The blend of historical color and current biotechnology trends will have great appeal to young adults. It works as historical fiction, science fiction, or a technology thriller.
Posted by Melissa at 2:59 PM