My March issue of Glamour magazine arrived just as the blizzard hit Chicago last week.  Class was cancelled and I knew the office was closed on Wednesday and I would be working from home, so Tuesday night consisted of curling up with my magazine and reading it cover to cover. 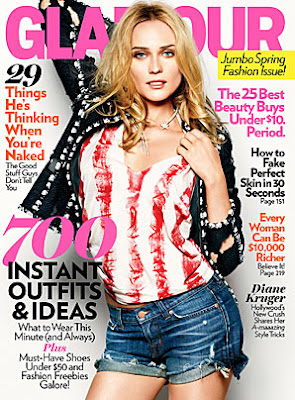 "How to Be $10,000 Richer" sounded interesting, but what really got my attention was that the article profiled two Chicago friends' weekly spending habits.  These women were both in their twenties with identical salaries.  I could really relate... to the bus fare, the groceries, the dinner for a friend's birthday, the coffee purchases, the Target shopping spree, the yoga classes... all purchases I would find in my own hypothetical spending summary. 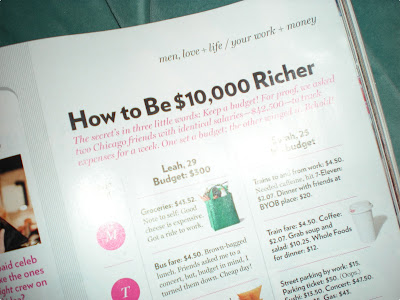 The intriguing part - one woman stuck to a budget and the other one just winged it.  The difference between the two women's weekly totals added up to over $200 dollars.  At first, I started picking apart the purchases of the woman who went without a budget (she wouldn't go to a concert every week, she wouldn't go to Target every week...), and I realized I was justifying her purchases like I do my own.  And when I took a closer look at the woman who did have a budget, her spending still allowed for an expensive dinner for her friend's birthday and a comedy show, but she chose to turn down a concert, pass on a pricey suede jacket, and bring leftovers for lunch some days.  Really, it's all about making smart choices. 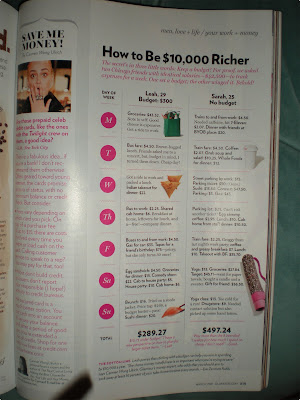 I feel like it's easy to make excuses for my spending... the wedding, the honeymoon, special occasions, furniture for the condo.  These are items that are important to us and things we want to spend money on.  But at some point, the spending has to be cut back.  Since this year began, I have been making a concerted effort to not spend on frivolous things.  (Okay, sometimes a girl has to take a cab in this weather...)  Let's just say, if I want to browse in Gap, I cannot bring any form of cash or debit/credit card with me.  It's like window shopping but allows for entering the store and surveying the apparel without caving to temptation.

It's not a perfect plan, and I'm okay with that.  I don't want to be a "scrooge" by any means.  Sometimes it is necessary to treat yourself or someone else (case in point, Scott surprised me with some lovely flowers the evening of the blizzard - definitely brightened my day!).  Bottom line - I am still working on knowing exactly where every dollar goes.  Life is worth living, but cutting back on a splurge here and there can really add up.  This article in Glamour proves it out... 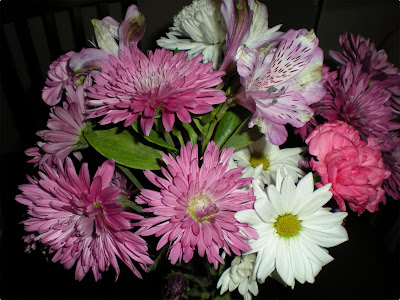