My mom forwarded this beautiful description of the recent Mass held at Notre Dame in remembrance of ND student Declan Sullivan.  It is a moving example of the universal celebration of the Eucharist and the strength of the Notre Dame "family."  I am blessed to be part of the Catholic faith and the Notre Dame family, two communities that intersect and extend across the globe.  My prayers are with Declan's family and friends.

Here is the link to Amy Holsinger's blog post and the full text follows below:
http://amyunsettled.wordpress.com/2010/10/29/declan/

I did not know Declan Sullivan.

On Wednesday, Declan was killed on campus in an accident involving a hydraulic lift. He was filming football practice for his job as a student manager, and high winds caused the scissor lift he was filming from to topple over.

He was 20 years old. He was a junior majoring in FTT (film, television, and theater) and marketing. He lived in Fisher Hall.

Tonight, Father John Jenkins, University President, presided over a Mass in Declan’s memory in the Basilica of the Sacred Heart.

Mass began at 10 pm. I was in a lecture and movie screening for class until 9:45 pm, and I wasn’t sure if I was going to make it to the Basilica in time to get a seat. I also wasn’t sure if I even wanted to go to the Mass. I didn’t know Declan, so a part of me thought, “Why should I take a seat from somebody who knew him, loved him, cared about him? Who am I to do that?” But another part of me desperately wanted to go to the Mass to show my support for Declan’s family during this horrible, difficult time. That part of me wanted to show the Sullivans that Notre Dame is a place where everybody matters, a place where the spirit of the community links everybody together. I was already running late and I knew that my baseball-cap-and-Ugg-boots attire wouldn’t fly at the Basilica, so I decided to go over to LaFortune Student Center, where I had heard there would be auxiliary seating and a live feed from the Mass.

As I walked across God Quad in the dark, I watched people walking towards the Basilica, two by two. The doors were wide open, emanating a warm golden glow. I was able to hear the prelude for Declan’s Mass all the way at the flagpole on South Quad, and the sound of the organ became clearer as I crossed through the pine trees and made my way to LaFortune.

Up the winding staircase, I burst in to LaFortune and brushed past the representatives from the Student Activities Office who tried to usher me upstairs to the ballroom. “We have some seats left up there,” a girl with a nametag whispered. By the time I heard her, I had already set down my backpack near my usual spot in the main lounge. LaFortune was different. Normally, the building serves as a study/food/coffee/socialization/meeting space, and it’s one of the busiest places on campus. But tonight, it was quiet. Dimmer, somehow.

All of the comfy armchairs were occupied, so after lingering against a wall, cornered by a trashcan, for a few minutes, I plopped down on the floor like a kindergartener. Mass was beginning. The broadcast was coming through on the two large televisions in the main lounge. (It was available online as well.) During the opening song, the SAO folks brought out a number of chairs from another room, and I snapped up a seat just as Fr. Jenkins was greeting the Sullivan family.

Then, the oddest thing began to happen. Everyone in the room began to respond to the TV, just like Mass.

Peace be with you.
“And also with you.”

I don’t know if it was reflex, a genuine desire to participate in the Mass, or some combination of both. All of a sudden, I found myself in the midst of the celebration of the Eucharist in the same room where I drink coffee, read the paper, watch ESPN, and play Sporcle.

Notre Dame is very good at a lot of things, and one of those things is church. Notre Dame knows how to put on a great Mass, and the higher-ups pulled out all the stops for Declan. The Folk Choir provided beautiful music for the service. I was particularly impressed with the selection of the readings. The first reading was Romans 8:31-39 (“If God is for us, who can be against us?”). The gospel reading was John 14:1-14 (“I am the way and the truth and the life. No one comes to the Father except through me.”).

Father Tom Doyle, Vice President for Student Affairs, gave the homily. He spoke eloquently and simply about storytelling—about Declan’s love of telling stories through film and about the feeling that we have been “written out of the book of life” that accompanies loss and grief. Doyle said, “Most days, we live in this place that is like Eden before the fall.” Normally, bad things don’t happen here. Students joke about the “Notre Dame bubble” for a reason. When terrible things hit Notre Dame, it seems that much worse.

As I watched the Mass on TV from my chair in the LaFortune, I noticed that the camera kept panning out to the people sitting in the pews at the Basilica. The Sullivan family sat in the front row. Gwynn, Declan’s sister, wore a Notre Dame football jersey and Mac, Declan’s 15-year-old brother, wore a Notre Dame sweatshirt. Across the aisle, the men of Fisher Hall sat in the other front section, all with their trademark neon green retro sunglasses pushed back into messy brown waves and perched on blonde crewcuts. Fishermen wear these distinguishing sunglasses around campus all the time, so seemed appropriate that they wore their shades to Mass in memory of their hallmate. The Notre Dame football team sat behind the contingent from Fisher Hall.
During the Eucharistic Prayer, LaFortune was filled with the mutterings of hundreds of students.

Lift up your hearts.
“We lift them up to the Lord.”

When it came time for the Our Father, the Folk Choir sang the beautiful Notre Dame Our Father. LaFortune joined hands and joined in. Then, everyone got out of their seats for the sign of peace. Hugs and handshakes all around.

The SAO employees notified us that the Eucharist was being distributed outside the Basilica and that we could leave and come back. After a moment of hesitation, about 75% of the room stood up, grabbed coats, and quietly filed out of the room. I was near the door, so I made it out quickly. Down the stairs, across the quad, towards the music and light. There were hundreds of people already standing outside the Basilica—overflow. Outside, there were musicians performing acoustic versions of the songs playing inside. As I huddled around the front of the Basilica, I turned around. A massive block of students stretched all the way from the foot of the Basilica to the stairs of LaFortune, and people continued to stream out of the building from the ballroom on the second floor.

We stood patiently, quietly in the cold. Occasionally, a priest would emerge from the big Basilica doors. People gathered around eagerly as the priest distributed Communion. Nobody jostled, nobody complained. We just waited. Slowly, more priests came out. After I received Communion, I walked back to LaFortune. I counted six priests standing outside, each man completely surrounded by students waiting for the Eucharist.

I made it back to LaFortune just in time for the final blessing.
The Mass is ended, go in peace to love and serve the Lord.
“Thanks be to God.”

And then, as always, we sang the alma mater, arms around each other, swaying.

The fervent prayers of the Notre Dame community are with Declan Sullivan and his family.

A night like this should never have to happen again. 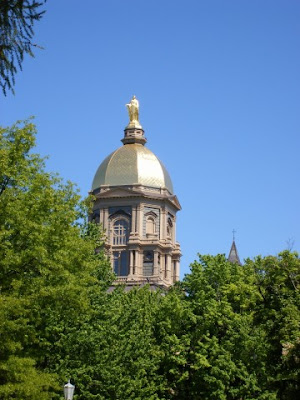 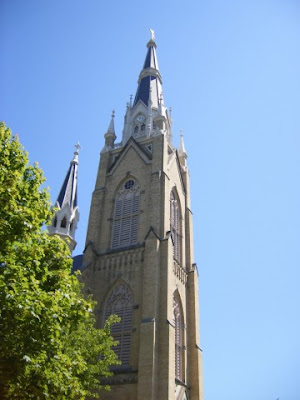 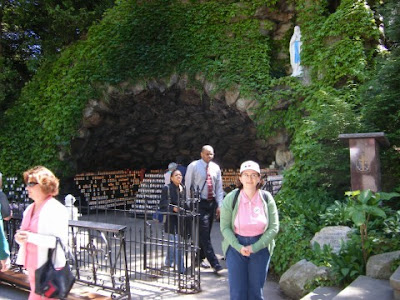 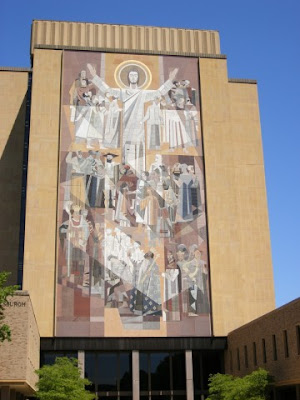